Every month, I have the enviable opportunity to travel to Tokyo, and, during my four-day stay, I’m well-able to spend my time ambling about the city’s pocket places of nature. Hoteled in a new neighborhood upon my most recent visit, I was just a hop, skip, and a Google-Map search away from Koishikawa Botanical Garden. Besides various winter-dead plants, here’s what I found within and just without… 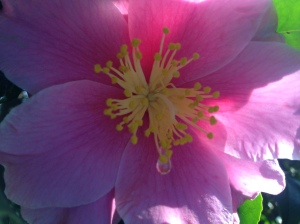 In a grove of camellias (a genus of flowering plants including that which produces our teas), I tasted the uber-sweet nectar oozing down from this gorgeous flower’s stigmas. 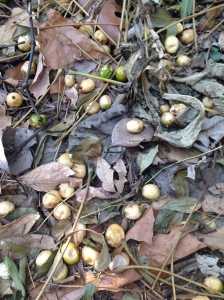 The hardy, aquatic Thalia dealbata, or appropriately nicknamed Alligator flag, has purple blooms in the summer and can even be found in my home state of Pennsylvania! 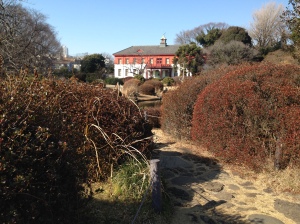 Within the park is the former University of Tokyo’s Medical School building.

Koishikawa also has a fern garden, in a sense, which includes Davallia mariesii (squirrel’s foot fern), a species of epiphytic fern native to Japan and eastern Asia.

Leaves of a favorite of Japanese gardens everywhere, Fatsia japonica. 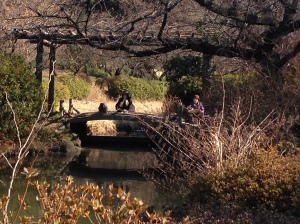 Artists in Koishikawa sketching the old university building and garden.

A seemingly neglected greenhouse (speculation) in Koishikawa — no entrance admitted.

A leafless Liriodendron tulipifera, or tulip tree, which was gifted to Japan from the USA during the Meiji (1868-1912) period! 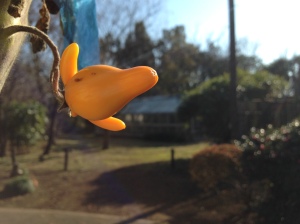 An inescapable landmark of Tokyo, as it’s next to Tokyo station, Pasona Group Inc. is famous for its indoor urban farm.

Pines adorned with LED-lit globes beneath the rollercoaster at Tokyo Dome City. 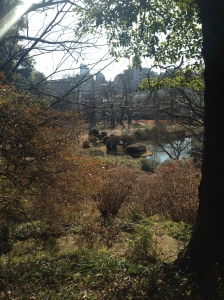 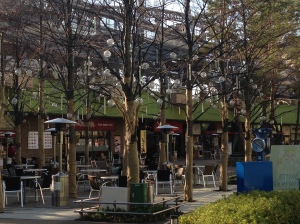 Sometimes it’s easy to forget that a plant has been around much longer than me. Ancestrally, that is. As with plants, as this article so succinctly puts it, organisms such as “the Monarchs have thousands of years of interaction with these plants and are well adapted to them.”

On the other hand, it’s hard to forget the fact inculcated from the early years of education that humans are a mere blip in Earth’s 4.5-billion-year history. And because of our brief, sentient time here on the third rock from the sun, it’s clearly taken some time to catch up.

Along with several studies released in the past few months, Nature World News reported that efforts to curb the loss of the Monarch butterfly population have been noble yet not entirely informed. Gardeners who took up the cause of planting certain kinds of milkweed – Asclepias, the plant vital to monarch breeding – actually unwittingly did more harm than good. Not to mention hasty bloggers as well.

Beautiful milkweed seeds, known to me in my childhood as “fish scales”

By planting Monarch favorites, the butterflies stuck around longer, allowing the parasite, Ophryocystis elektroscirrha, to take advantage of the butterfly’s stagnant stay over the winter and wreak havoc on its well-being and, thus, inhibit its migration.

The solution, then, according to the majority of startlingly dated articles and a charity effort continuing to promote Monarch butterfly rehabilitation, is to plant not the milkweed species found in the butterfly’s final migration destination (such as tropical milkweed) but native species.

One Philadelphia-based blog suggested planting Asclepias tuberosa (Butterfly Weed), Asclepias incarnata (Swamp Milkweed), or Asclepias syriaca (Common Milkweed). Others have petitioned against companies responsible for engineering herbicide-resistant crops that in turn are killing off the Monarchs.

As always, I’m wont to donate to any cause, but I’ll ensure the milkweed seeds I collected during my trip to Pennsylvania are put to good use.

If only. Even so, persimmons are still pretty fun. All around Koriyama, persimmon trees (kaki in Japanese) are still adorned with their jack-o-lantern–like fruit, which the crows and warblers (the link does not represent warblers here in Japan but is a recording of one of the most beautiful calls in the aviary world) squabble over and pick at. 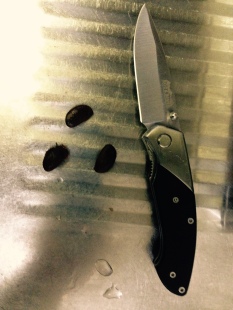 Persimmon seeds, ready to be sliced

While in Asia, mythology behind the orange fruit is anecdotal, the persimmon has been used to divine the weather, much like the rodent from near my neck of the woods in Pennsylvania. According to extremely iffy sources, the shape of the cotyledon (the embryonic first leaves of a seedling) inside will predict the weather as such:

Unfortunately, I wasn’t able to find out exactly why the cotyledons form such shapes in their embryonic stage, though I did come across an article suggesting the persimmon as a potential source for hangover cure. (Incidentally, if you can enlighten me on the reason for these cutlery-inspired forms, I’d greatly appreciate it.)

Spoon-shaped cotyledon of a persimmon seed

So what did the persimmon say this year?

Sources vary on the meaning of the aforementioned shapes, but in any case, grab a bottle and settle in for a snowy winter nonetheless.

As mentioned in a previous post, there have been a few large-scale programs set up in the past five years, including the Convention on Biological Diversity and Aichi Targets under the Nagoya Protocol.

Poring over the latter, I was overwhelmed with questions, mainly about how each target’s broad aim would be implemented, monitored, and reported throughout the world.

Luckily, someone – the nonprofit conservation organization NatureServe to be precise – has been tackling this project over the past two years. NatureServe’s Biodiversity Indicators Dashboard, introduced last month but not yet fully operational, will serve to address the following in monitoring and assessing biodiversity (taken directly from NatureServe’s website):

Eichhornia crassipes, or water hyacinth, is an invasive species in the region of the African Great Lakes

The Dashboard focuses on three biodiversity “hotspots”: the tropical Andes, the Great Lakes of Africa, and the Mekong River Valley. Such aims listed in the Aichi as slowing and halting natural habitat loss, preventing the extinction of threatened species, and the protection of biodiverse areas (all by 2020) will be shown in overall trends and quantitative data in the proposed Dashboard.

One of the targets included in the project touches on a bit of a blindspot in otherwise good-intentioned biodiversity efforts: the benefit to the communities in which environmental programs are being carried out. Tied in with financing issues, the pressure on communities in such biodiversity hotspots to participate in the efforts may prove economically onerous. (Not to mention the issue surrounding who receives the benefit from genome sharing.)

So although the Dashboard’s aims are fairly wide-reaching and lofty, it helps to conceptualize just how the Aichi targets might be achieved. And whether or not these goals will be met by 2020, it’ll be interesting to see whether and how NatureServe’s idea will be embraced by the international community and where it will hopefully go from there.

It’s astounding to imagine the mass extinction brought on by the asteroid thought to have smashed into the earth 66 million years ago. Since then and especially since 2010, the year impressively dubbed the “International Year of Biodiversity”, it’s been reassuring to see news and reports highlighting even the smallest loss of or decline in biodiversity.

A small loss—in size rather than implications, that is—has been in the number of monarch butterflies migrating to Mexico. According to a 2012 study, the big ones – climate change deforestation – were cited as causes but also, surprisingly, the loss of a field favorite of my native Pennsylvania. 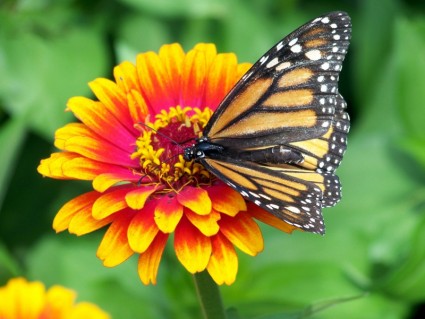 National Geographic’s article published in fall last year focused on a tie between monarch butterfly decline and the disappearance of the milkweed plant, the insect’s host plant for its eggs and larval food, due to pesticide use. The study cited stated that “between 1995 and 2013, [their] model estimated that 149 billion individual milkweed stems were lost, representing a 21% decline in milkweed abundance.”

As the plant is so important for these butterflies and as butterflies are vital to our ecosystem, there has been noticeable attention given to the matter lately. A Google search on the subject returns an overwhelming number of sites supporting both monarch butterfly and milkweed colony rehabilitation.

Living in Fukushima, I can’t help but think of the two big ones here that affect biodiversity and on which I’ve already written: kudzu and radiation.

Yet one I didn’t consider is stalked, similar to milkweed, and spread all over Pennsylvania and now, unfortunately, all over Japan. 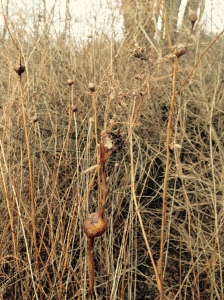 A goldenrod plant with a gall on its stem

Goldenrod is beautiful, and it’s amazingly hardy, often one of the first to colonize an area after soil disturbance or fire. There are plenty of blogs and reports bashing goldenrod for its allergy-inducing pollen (apparently unfounded) and its tendency to take over and crowd out other plants. Still, others laud it for its edible parts and medicinal properties.

While I haven’t noted them in Pennsylvania, the Golden Rod Fly, Eurosta solidaginis, depends on the plant for a year-long larval home. A search yields little information on efforts to control the invasive plant in Japan, so perhaps its effect on biodiversity has been too insignificant to note.*

In Japan, the loss of biodiversity has not only been linked with invasive plants and climate but also population decline in rural areas. While less people = less biodiversity might sound strange, it’s the practice of satoyama – forest and rice paddy management – that has always played a key role in plant biodiversity.

Slivers and copses of forests punctuate the numerous blocks of rice paddies throughout Tohoku, and these forests have been kept from growing out of control by the locals for hundreds of years. Now, as the population gravitates towards large cities and leave the countryside, large trees have taken over and inhibited other plant growth, much like goldenrod and kudzu.

In response, areas in Japan have, in the past two years, started to take advantage of biomass energy. In Maniwa, Japan, a lumber company has been using “offcuts, discarded bark and shavings produced in lumber production to create wood pellets for boilers that can produce electricity and dry wood.”

Still, it’s hard to ascertain how biodiversity is affected as well as the effects of large-scale efforts being put into motion to promote it, such as those of the UN Convention on Biological Diversity and Nagoya protocol. With the exception of a few specific aims, both have been criticized for their vague wording, ambiguous aims, and unclear ongoing status.

Although the efforts mentioned above are few and small in scale – including ones such as encouraging gardeners to plant more milkweed to save the monarchs – it’s nice to see local efforts and successes let alone interest in preservation.

*A blog with some helpful advice to rid gardens of goldenrod: http://www.coldclimategardening.com/2008/10/09/goldenrod-this-native-plant-should-be-kept-out-of-the-garden/