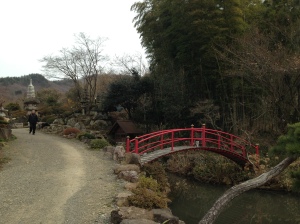 Hanamiyama Park, located a few minutes’ drive across the river from downtown Fukushima City, is a privately owned property, the owner of which planted a variety of cherry and plum blossoms, Mahonia japonica, and other local flora and graciously opened the park to visitors for free in 1959.

Although the majority of trees had not yet blossomed during my visit with some friends a week ago, a few, including the yellow-flowered Chimonanthus praecox and white-petaled plum, had bloomed in rows along the spiraling path we trekked. 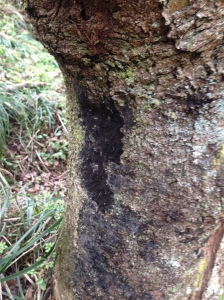 It was the bare cherry blossom trees, however, that caught my attention; a black pitch, sometimes in globby clumps and most often in smooth, evenly spread patches, appeared on the bark. We walked along, and the tar-like substance became more prominent.

My Japanese friend asked one of the garrulous (rarely an opportunity to use this fantastic word!) caretakers setting up ladders for pruning if this plentiful black mold, as it were, was some equivalent of a Band-Aid or cosmetic cover-up for damaged trees. He motioned to the line of trees abutting the path we had walked down. “There’s nothing we can do” was the only Japanese I could make out, but it was clear that the dark marks were no bueno. 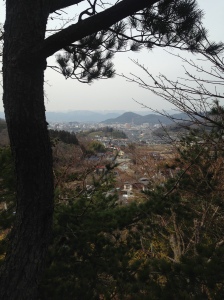 No good, but no explanation, either. The caretakers said although they didn’t know what was causing the problem, it did start from within, decaying the branches fully from the phloem to the bark.

Possible culprits include pathogens such as Septobasidium (velvet blight) or, less convincingly, Leptographium.

Until the staff figures out the cause of the blight, it could spread to the hundreds of other gorgeous cherries and plums on the hill that gardeners have clearly tended so well since the park’s opening.